​The Purple Pill in the Red Zone 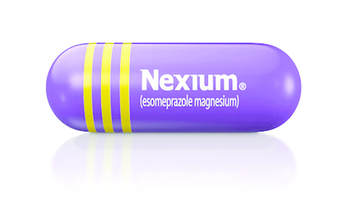 10/2017
Unaware of the potential life-threatening side-effects allegedly linked to the proton-pump-inhibitor (PPI) group, coupled with the ease of availability over the counter, millions of people throughout the country have used this group of drugs to treat dyspepsia, peptic ulcer disease, and gastroesophageal reflux disease. PPIs differ in their drug interactions and the way they are broken down by the liver.
Nexium is the brand name for esomeprazole used to treat a number of stomach-related problems by blocking a proton pump and reducing the production of acid in the stomach. Due to its property of interfering with calcium absorption, Nexium has been linked to increased risk of osteoporosis and/or bone fractures, Chronic Kidney Disease (CKD), acute kidney injury, interstitial nephritis, and other kidney problems. What started as only a handful of lawsuits that had failed to qualify for MDL formation in February 2017, has now acquired the desired status owing to the increasing number of lawsuits. Other PPIs (Prilosec, Prevacid, Protonix, etc.) face similar allegations in litigation.
FDA WARNINGSIn 2010, the FDA released a safety communication based on results from studies conducted to test the link to bone fractures of the hip, wrist, or spine. The following year, the FDA ruled that the warning was only for the prescription-based long-term use of Nexium and required no label warnings for the OTC variety. In 2014, another safety warning was released for acute interstitial nephritis, a condition, if remained untreated, may become chronic leading to further complications that might require life-long dialysis treatment or a kidney transplant. However, no black-box warnings have been required yet.
NEXIUM: IMPORTANT LAWSUITS/SETTLEMENTS/FINESNEXIUM BONE INJURY LAWSUITThe FDA warnings, research studies, and growing awareness resulted in the filing of several Nexium lawsuits. A multi-district litigation (MDL): 2404 in the U.S. District Court for the Central District of California presided over by Judge Dale S. Fisher was established in December 2012, for bone injury cases. However, this was closed in October 2014, with the judgment passed in favor of manufacturer defendant.
NEXIUM KIDNEY DAMAGE LAWSUITIn August 2017, realizing the growing size of Nexium mass tort claims, centralization of all the Nexium, Prilosec, and Prevacid alleged kidney injury cases resulted in the formation of MDL 2789 presided by Hon. Claire C. Cecchi, U.S.D.J. and Hon. Mark Falk, U.S.M.J. Plaintiffs allege that the drug-makers knew or should have known about the severe side-effects of the drugs in question and that they withheld information from the medical community and consumers. More than 275 lawsuits have been centralized; the count is expected to grow eventually. The District of New Jersey was selected as the venue of choice as lawsuits were already pending there, and it was convenient for most plaintiffs including the defendant manufacturers. The MDL is now in discovery stage that began with a case management meeting this October to discuss details required to advance the litigation necessary for pretrial discovery. The litigation will soon witness selection of Bellwether cases.
This article was submitted by Neural IT. Neural IT provides cost-effective and timely medical reviews for screening potential mass tort cases. For more information, please visit www.neuralit.com. You may email them at info@neuralit.com or call +1-844-NIT-TEAM (648-8326).
Disclaimer: The content provided on this website is provided for general informational. It is not intended as, nor should it be considered as a reference for any medical or legal advice. The information provided should be used at your own risk based on your judgment. You assume full responsibility and liability for your own actions.
https://health.usnews.com/health-care/patient-advice/articles/2017-06-27/whats-the-connection-between-vitamin-d-and-breast-cancer

Comment: Its sad when we get more information from lawyers than  our doctors.
Powered by