Stomach acid drugs may cause depression

A new study — now published in the journal Psychotherapy and Psychosomatics — has found a link between a common class of stomach drugs called proton pump inhibitors and depression. The researchers suggest that the pills might lead to major depressive disorder by disrupting the gut's bacteria. 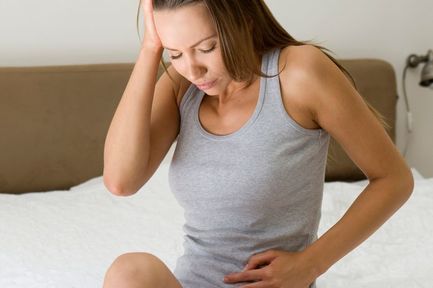 More and more studies are now pointing to the numerous ways in which our gut bacteria may influence both our mental and emotional well-being.
For instance, researchers have found that germ-free mice that had been deprived of beneficial gut bacteria displayed symptoms of anxiety, depression, and cognitive impairment.
Since the bacteria in our gut can alter the function of our brain by producing certain hormones or neurotransmitters — and emotional responses can, in turn, affect our gut bacteria — it should come as no surprise that some studieshave found a link between post-traumatic stress disorder and certain strains of bacteria.
Other studies have not only pinpointed specific bacteria whose absence can trigger symptoms of depression in rodents, but they have also shown that supplementing said bacteria can reverse signs of depression.
Now, an observational study suggests that proton pump inhibitors — which are a class of drugs typically prescribed to treat acid-related stomach conditions such as gastroesophageal reflux disease — increase the risk of developing major depressive disorder.
This is the leading cause of disability both in the United States and worldwide.
The first author of the new study is Wei-Sheng Huang, from the Department of Psychiatry at the Taipei Veterans General Hospital in Taiwan.

Stomach acid pills may disrupt gut-brain axisHuang and team examined data on 2,366 individuals who had been taking proton pump inhibitors and went on to develop depression, and compared them with 9,464 people who also took the drugs but did not develop depression.


The researchers applied logistic regression analysis and adjusted for various demographic factors, as well as for psychiatric comorbidities such as anxiety and substance abuse disorders.
The study revealed that, compared with those who did not develop major depressive disorder, "patients with major depression had a greater prevalence of higher cumulative defined daily dose" of proton pump inhibitors.
Specifically, the risk of clinical depression increased for those who took the drugs pantoprazole, lansoprazole, and rabeprazole, while in those who used omeprazole and esomeprazole, "only a trend significance was noted."
"To our knowledge," write the study authors, "this was the first study to investigate the association between [proton pump inhibitor] exposure and the risk of major depression."


While the mechanisms behind such an association remain mysterious, the authors venture a couple of possible explanations.
The drugs might raise depression risk by dysregulating the gut-brain axis, they suggest, or by preventing the organism from properly absorbing nutrients after the use of stomach drugs.
Still, the researchers caution that physicians should continue to prescribe the drugs as and when needed, bearing in mind the range of side effects that these drugs may have — which include pneumonia, bone fracture, and gastrointestinal infections.
Huang and team recommend that future studies investigate the pathophysiology behind the association they found.
​https://www.medicalnewstoday.com/articles/321164.php

Comment: Three years ago they reported it was the disease, that depression was being caused by stomach bacteria.   Now it looks like the cause of the depression was the "cure".  As Dr Eisenstein said.  Don'r reduce the acid.  Use Betten Aid to stay away from these dangerous prescription drugs.
Powered by