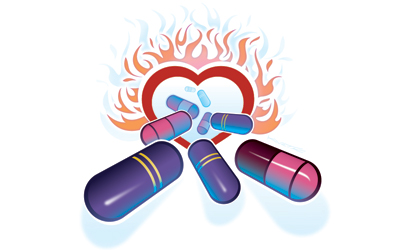 Proton pump inhibitors increased the risk for hepatic encephalopathy and spontaneous bacterial peritonitis in patients with cirrhosis and ascites, according to recent findings published in Hepatology.

“The trials from which our data originate were designed to determine the efficacy of satavaptan treatment, not to determine the mechanisms by which [proton pump inhibitors (PPIs)] may or may not cause [hepatic encephalopathy (HE)],” Gitte Dam, MD, PhD, in the department of hepatology and gastroenterology at Aarhus University Hospital in Denmark, and colleagues wrote. “Nonetheless, the findings that PPI use is a risk factor for [spontaneous bacterial peritonitis (SBP)] and that SBP is a risk factor for HE do provide support for the hypothesis that PPIs contribute to the development of HE by promoting translocation of gut bacteria.”
PPIs are designed to decrease gastric acid production and raise the pH of the stomach, but this can facilitate bacterial overgrowth, which can translocate the bacteria to the blood and lymph nodes, the researchers wrote. Dam and colleagues hypothesized that this PPI-induced bacterial translocation can lead to SBP and HE.
The researchers assessed the association between PPI use and the development of HE or SBP in 865 patients with cirrhosis and ascites. They used data from three 1-year trials of satavaptan (Aquilda, Sanofi-Aventis), a treatment for ascites. Afterward, they determined any association by using Cox regression.
Fifty-two percent of the patients used PPIs at some point during the trials. The cumulative 1-year risk for HE was 31% for those who used PPIs vs. 25% for those who did not. Compared with non-use, PPI use was associated with an increased risk for HE (HR = 1.36; 95% CI, 1.01-1.84) as well as overt HE (HR = 1.88; 95% CI, 1.21-1.91). It was also associated with an increased risk for SBP (HR = 1.72; 95% CI, 1.1-2.69).
These findings suggest that PPIs do increase the translocation of gut bacteria, the researchers concluded.
“The parallel increase in SBP risk points to a mechanism that goes through increased translocation of bacteria from the gut to the blood,” the researchers wrote. “Our findings suggest that prescription of PPIs to patients with cirrhosis at risk of HE needs an appropriate indication.” – by Will Offit

Dr. Eisenstein had spoken for years bugs do not like acid.  Betten Aid helps with re-flux without reducing the acid.