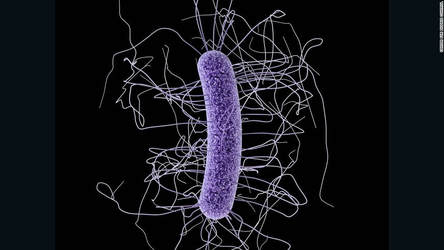 Clostridium difficile (known as “C. diff”) bacterial infections are commonplace in hospitals and nursing homes. C. diff is responsible for large numbers of deaths every year and is the leading cause of hospital-acquired diarrhoea. It is regarded as a ‘superbug’ by U.S. Centres for Disease Control.

C. diff is a spore-forming bacterium, which means it needs a trigger, known as a germinant, to break open its shell, release its toxins and multiply. Research on mice discovered that calcium in the gut acts as that trigger when combined with a bile salt (taurochlorate), produced in the liver.

“Our data shows that C. diff spores germinate in response to a combination of bile salts and intestinal calcium,” concluded the research team from the University of Michigan (U-M) Medical School and the U.S. Food and Drug Administration (FDA).

"These spores are like armoured seeds, and they can pass through the gut's acidic environment intact," said Philip Hanna, the paper’s senior author and Associate Professor of Microbiology and Immunology at U-M. "Much of the spore's own weight is made of calcium, but we've shown that calcium from the gut can work with bile salts to trigger the enzyme needed to activate the spore and start the germination process.”

Although the trial was conducted in mice, researchers said that findings might explain why some human patients are at higher risk of C. diff infection than others.

The researchers suggested that individuals with high gut levels of calcium could be at higher risk for C. diff infection. High intestinal calcium may be the result of supplementation, poor absorption resulting from low vitamin D status, medication use (including Proton Pump Inhibitors (PPIs)), or gut diseases such as Crohn’s or colitis.

The researchers noted that all the individual elements above are established risk factors for C. diff infection and critically, that “deficient intestinal calcium absorption (i.e., increased calcium levels) is associated with these risk factors.”

The discovery that calcium germinates C. diff spores is also significant; as the amino acid, glycine was previously thought necessary to the process. This study demonstrated that spore germination could occur without glycine.

Travis Kochan, a graduate student in the research team, observed that the liquid used for growing C. diff for their studies contained calcium. When he chemically removed calcium from the growth medium, spore germination ceased.

“The C. difficile germination mechanism presented here, together with clinical correlations regarding calcium absorption, suggests an exploitable target for the development of new therapeutic strategies,” Hanna concluded. He also suggested that next steps would include testing the new findings in a clinical setting.