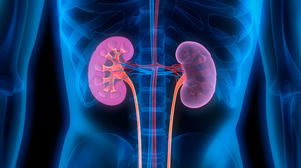 04/2016
REBECCA ZUMOFF
New research published in the Journal of the American Society of Nephrology (JASN) indicates that long-term use of proton pump inhibitors (PPIs), commonly used to treat heartburn, acid reflux, and ulcers can have damaging effects on the kidneys.

In 2013, an estimated 15 million Americans were prescribed PPIs, which reduce gastric acid production. This number is likely an underestimate because the medications are also available over-the-counter and can be purchased without prescription, according to background information for the study.

A study published in JAMA Internal Medicine in January also showed a connection between the drugs and kidney damage.

To assess the safety of this widely used drug class, a team led by Yan Xie, MPH and Ziyad Al-Aly, MD, FASN, from the Clinical Epidemiology Center at the VA Saint Louis Health Care System and Washington University in St. Louis, analyzed information from the Department of Veterans Affairs national databases. The investigators identified 173,321 new users of PPIs and 20,270 new users of histamine H2 receptor blockers, an alternative class of drugs also used to suppress stomach acid. Over five years of follow-up, those taking PPIs were more likely to experience kidney function decline than those taking H2 receptor blockers. PPI users also had a 28% increased risk of developing chronic kidney disease and a 96% increased risk of developing kidney failure. Furthermore, there was a graded association between duration of PPI use and risk of kidney problems, with those who took PPIs for a longer time being more likely to develop kidney issues.

“The results emphasize the importance of limiting PPI use only when it is medically necessary, and also limiting the duration of use to the shortest duration possible,” said Dr. Al-Aly.” A lot of patients start taking PPIs for a medical condition, and they continue much longer than necessary.”

Story Source:
The above post is reprinted from materials provided by The JAMA Network Journals. Note: Materials may be edited for content and length.