Babies Given Antibiotics or Antacids May Be More Likely to Have Allergies, Study Finds 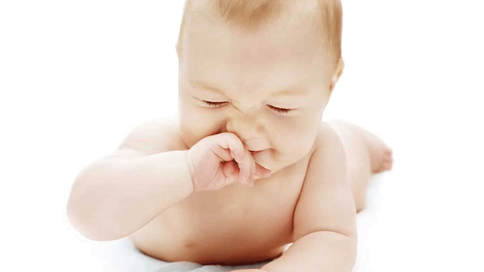 f your little one is ill, you want to do everything you can to help her get better — fast. So it's no wonder that there are times pediatricians and parents would want to lean on antibiotics. Similarly, babies suffering from acid reflux (or GERD) may be given prescription antacids. Now, new research, published in JAMA Pediatrics, highlights a potential risk associated with antibiotics and antacids: a heightened risk of food allergies.
What the Study Looked At
Researchers analyzed data from 792,130 infants who were covered by a health insurance program. In the group, 131,708 babies were given antibiotics, 60,209 got antacids in the form of histamine H2-receptor antagonists (called H2 blockers), and 13,687 were given antacids called proton pump inhibitors (P.P.I.s) during their first six months of life. Both kinds of antacids decrease the production of stomach acids that can cause tummy upset in little ones.
What the Study Found
The study concluded that infants who were given H2 blockers or P.P.I.s were more than twice as likely to have a food allergy as babies who weren't given any antacids. The risk of developing an allergy to cow's milk was particularly high.
Meanwhile, the babies who were given antibiotics had a 14 percent greater risk of developing a food allergy, a 51 percent higher risk for anaphylaxis (a kind of allergic reaction that can be deadly), and more than double the risk for asthma.
Researchers suspect the link is due to both antacids and antibiotics disrupting babies’ normal gut flora, or bacteria in the intestines.
“Let’s not prescribe these medicines for things that are very common in babies,” lead study author Dr. Cade M. Nylund, an associate professor of pediatrics at the Uniformed Services University, told The New York Times. “Just because a baby spits up doesn’t mean that it’s a disease that requires treatment with a P.P.I. And we have to avoid over-prescribing antibiotics for upper respiratory infections and other viral illnesses.”
What This Means for Parents
This research shouldn't make you worry if your baby does happen to need antibiotics or antacids. But it does emphasize how important it is for parents to investigate and discuss the potential pros and cons associated with these medications. In cases where antibiotics or antacids are necessary, just make sure your baby is under the care of a pediatrician and you're giving the medication exactly as directed by the doctor. And though more research needs to be done, these findings will hopefully encourage you ask your little one's doctor whether these drugs are the best option for your baby.