Giving PPIs and Antibiotics Together May Disrupt Heart Rhythm 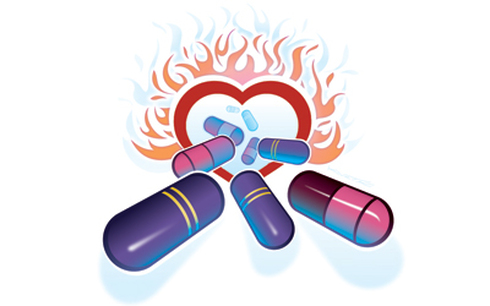 11/2016
Taking two common drugs—an over-the-counter proton pump inhibitor (PPI) and an antibiotic—together was associated with an increased risk for life-threatening arrhythmia (J Am Coll Cardiol 2016 Oct 10. [Epub ahead of print]).

New York researchers scanned data from two independent databases to investigate possible QT interval–prolonging drug–drug interactions: 1.8 million adverse event reports from the FDA’s Adverse Event Reporting System and 1.6 million ECGs from 382,221 patients treated at NewYork-Presbyterian Hospital/Columbia University Medical Center, in New York City, between 1996 and 2014.
“By using large data sets of clinical records available from the FDA and in electronic health records at our hospital, we were able to use data science to accurately identify a previously unexpected interaction from among millions of possibilities, which would not have been suspected using current surveillance methods,” said Nicholas Tatonetti, PhD, assistant professor of biomedical informatics at Columbia.
Even with large amounts of data, the association between the drug combination and the prolonged QT interval does not prove the drugs caused this problem, the researchers said. To get more information, researchers then applied more traditional analyses and laboratory experiments to validate the predictions.
In the study, patients taking ceftriaxone, a cephalosporin antibiotic, and the PPI lansoprazole were 40% more likely to have a QT interval above 500 milliseconds, the current FDA-stated threshold of clinical concern. Among men taking the two drugs, QT intervals were 12 milliseconds longer than men who took either drug alone. This trend was then validated by cellular data from the electrophysiology experiment, which found that together these drugs block one of the cardiac ion channels responsible for controlling heart rhythm. White women and men appear to be more sensitive to this interaction.

The interaction identified in the data analysis was specific to lansoprazole and ceftriaxone, but not other cephalosporins. Although they share similar chemical structure and mode of action, Dr. Tatonetti said, “Our algorithm was able to distinguish between one that would cause this interaction [ceftriaxone] and another that would not [cefuroxime]. We tested both in the lab and the algorithm was correct in both cases.”
An increasing number of Americans are taking multiple prescriptions and nonprescription medications. Nearly 70% take at least one prescription drug, and more than half take two, according to a recent study (Mayo Clin Proc 2013 June 19. [Epub ahead of print]). Twenty percent of patients take five or more prescription medications. Among the most commonly prescribed medications are antibiotics. Finding ways to identify potentially harmful interactions is critical.
While the new study was limited to common drug combinations prescribed in one hospital system, Dr. Tatonetti and his team believe that analyses made possible through wider data sharing can be used to look more extensively at potential drug interactions.
“The analyses are relatively rapid and inexpensive to perform, and they focus on drug combinations that are actually used together in clinical practice,” Dr. Tatonetti said.

The researchers looked at QT interval because of its importance in drug safety and drug development. “Investigative drugs that have the potential to prolong the QT interval will be withdrawn before they are ever given to a patient; however, no such checks exist for drug–drug interactions, and they often go undiscovered for years,” Dr. Tatonetti said.
The study was funded by the National Institutes of Health.
—Marie Rosenthal